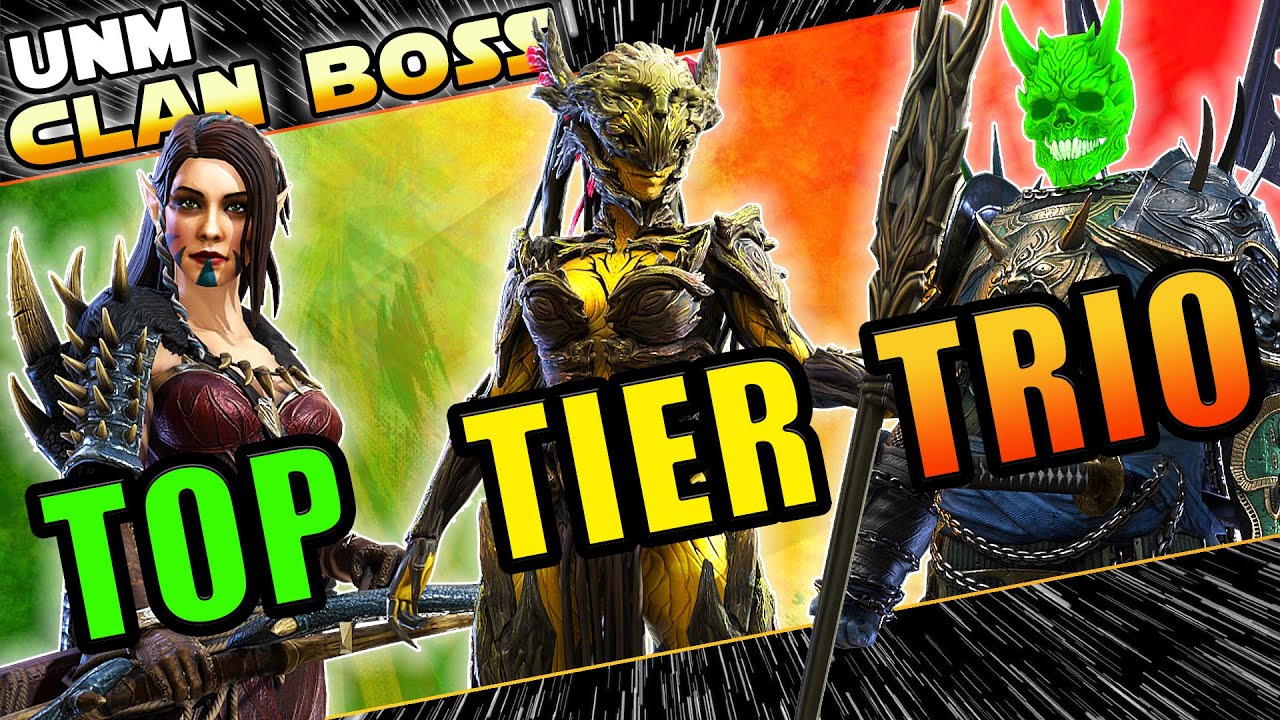 The Myth Rue-Elva Clan Boss comp is a variation on the famous Myth-heir comp using two of the new faction champions Ruella and Elva Autumnborn however, in this iteration of the comp we are also going to bring in Michanaki as the main DPS champion, and oh boy does it pay off!

Demytha:
We all know what she does, Block Debuffs and her famous Block damage

Seeker:
Seeker enables this comp to go to a 2:1 ratio with his increase turn meter on his A2

Ruella:
She is our debuffer she brings to the party decrease Defence and Weaken which help increase the potential damage output. She also helps seeker with the turn meter boost responsibilities.

Elva Autumnborn:
Elva is bringing block debuffs and increasing speed on her A2; she is also being used to cleansing the stun with the same skill.

Michanaki:
He doesn’t bring much in a way the conventional clan boss needs but what he lacks in fails in comparison what he brings and that is ally attacks and Hex. especially the ally attacks.

There is no wiggle room with the speeds on this one they have to be exactly, sorry!

(all speeds are with Elva’s Aura)

This team is based upon the Myth Heir teams, utilising the Turn Meter boosting abilities and debuffs of Ruella along with the Cleanse, Speed buff, and Block Debuff buff of Elva Autumnborn to build an unkillable team focused around Demytha. The advantage to using Ruella is an added DPS champion who can help with the speeds, adds a permanent (with the Demytha buff extension) Crit Rate buff and consistent and useful debuffs. It is not full auto, needing a 2 turn delay before using Elva’s A2 skill (A1, A1, A2), but after that point will run on auto.

The listed speeds are the minimums and should be adjusted according to different base speeds and champions. There is plenty of room to adjust up on speeds, though the speeds of Demytha and Ruella are closely tied together – raise one, you’ll likely need to raise the other. Elva is essential to remain affinity friendly, though other champions (like Heiress or Lydia) can be used in that position. Ruella must have her A3 prioritised to maintain consistency.

Demytha – prioritise a2 first then a3

Ruella – prioritise the a3 first

As you can see in Deadwoods video down below this team when built correctly will absolutely smack. 103.12million damage is incredible with Michinaki hitting for 43.3m on his own

What do you think of this comp, would you build it? I know I am considering it, all I need to do is get michinaki, Ruella and Elva, leave a comment down below, we love hearing from you!